We have asserted textbook style categories for Low-Power, Wide-Area (LPWA) connectivity Blog 1: Categories of LPWA Modulation Schemes.  Then we went back to basics to get some framework and vocabulary in place to discuss these various schemes in Blog 2: Back to Basics – The Shannon-Hartley Theorem, where we introduced the critical concepts of spectral efficiency (η), Eb/No, and how a point of diminishing returns can be reached in the quest to reach the Shannon Limit.

Based on this framework, what I would like to discuss here is why Chirp Spread Spectrum (CSS) can be treated more generically as Non-Coherent M-ary Modulation (NC-MM). The title of this blog likely makes you ask what could CSS possibly have to do with Jell-O?  With brilliant marketing, Jell-O has eclipsed the more generic terminology of “gelatin” defined as “protein obtained by boiling skin, tendons, ligaments, and/or bones with water.”  Non-Coherent M-ary Modulation (NC-MM) is analogous to “gelatin”; LoRa™(CSS) is analogous to “Jell-O”.  It is actually a compliment to the marketing around LoRa (CSS). As you can imagine, if you want to study the science behind Jell-O, you would have better luck starting with “gelatin”.  The same is true with understanding LoRa(CSS).

But first, we must justify why we’re lumping CSS into the NC-MM category.  There are two parts to the argument:

I will back up the two arguments below. 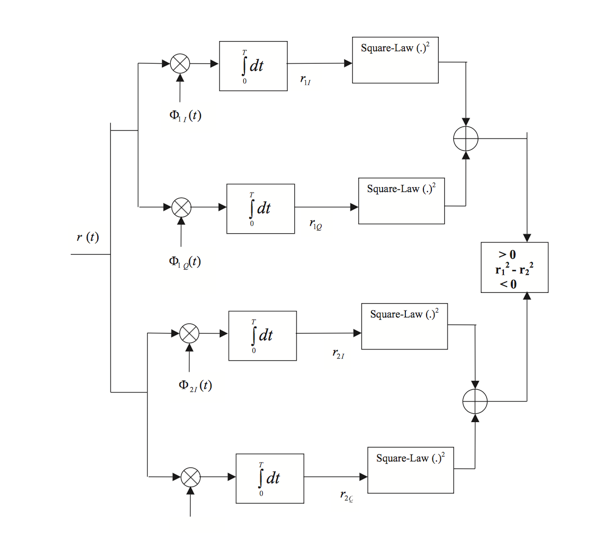 Beware the straw man argument! Taking a look at the document entitled “LoRa Modulation Basics”, they do a comparison of the LoRa modulation (also known as CSS) against FSK and make the claim of an impressive sensitivity improvement of 15 dB for the SF = 12 LoRa mode over FSK (There is an obvious typo in the equivalent bit rate column in SFs 6 through 9 where the data rate is expressed in b/s as opposed to the stated kb/s.)

First, we need to talk about the relationship between SF and spectral efficiency.  For un-coded Non-Coherent M-ary Modulation (NC-MM) the expression for η = (SF)2-SF (in other words a non-coherent symbol yields SF bits of information and that non-coherent symbol is of duration 2SF.)    If channel coding as added into the mix (like in the LoRa waveform), this expression becomes η = R(SF)2-SF where R is the code rate (typically rate ½).

On face value, that makes the claim that the math is the same rather dubious.   However, as discussed in Blog 2: Back to Basics – The Shannon-Hartley Theorem, there are several reasons why similar modulations may achieve different sensitivity.

As it turns out, relatively higher data rate, spectrally efficient, un-coded 2-ary FSK is fairly easy to beat up on in terms of sensitivity.  A more accurate comparison point would be the coded 7-ary FSK that a company called Sensus uses.  The Sensus flavor of FSK is more of an apples-to-apples comparison because 7-ary FSK has a lower spectrally efficiency (η) which allows for better Eb/No.

In the table above, notice many of the LoRa modes have η << 0.01.  Is that bad in terms of capacity?  Not necessarily, is the general answer.  What’s not explored in the Shannon-Hartley theorem is the ability to send simultaneous links over the same bandwidth.  That is potentially a bit of a “loophole” in the theory. Does LoRa leverage this “loophole”?  What about RPMA?  I’ll explore that in more detail in Blog 4: “Spreading” – A Shannon-Hartley Loophole?.

And finally, I’ll get back into the real world and test whether this discussion is even useful in Blog 5: The Economics of Receiver Sensitivity and Spectral Efficiency to attempt to quantify the commercial value of that which is discussed on these blogs.

At any point, if you’re interested in a more in-depth treatment of these topics, please download, How RPMA Works:  The Making of RPMA.