THE MACHINE NETWORK IN CHARLOTTE

Since its founding in 1768, Charlotte has grown from a sleepy hamlet to the second-largest financial center in the United States. With nine Fortune 500 companies located in the area, as well as being the major hub for the U.S. motorsports industry, some of the greatest minds in the nation call Charlotte home. The explosion of IoT technologies is fueling growth across industries, and it’s cities like Charlotte that will reap the rewards.

The Machine Network, powered by RPMA technology, enables devices, sensors, and machines to communicate with great efficiency, over great distances, more reliably than any other wireless technology. With the deployment of RPMA in Charlotte, municipalities, government agencies and businesses are able to tap into its always-available, ubiquitous coverage to build IoT solutions. 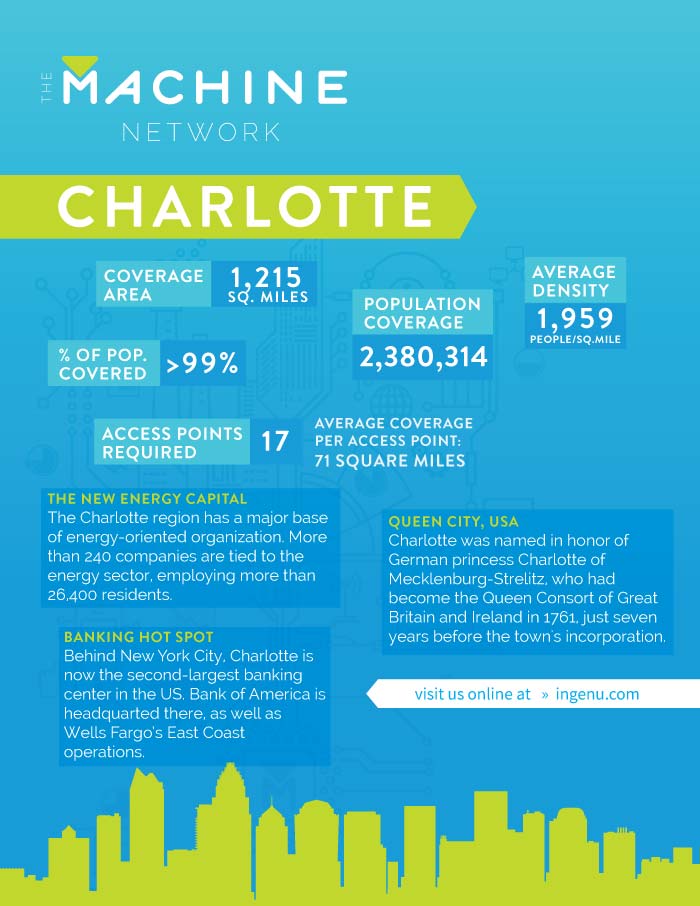 What good is a smart device without connectivity? Not very! The Machine Network, now deployed in Charlotte and its surrounding areas, provides necessary wireless data connectivity and services to all types of hardware at great distances and using very little power. The network around Charlotte currently covers a little over 1,200 square miles, with seventeen RPMA Access Points providing coverage. Unlike the competition, RPMA scales quite nicely: once the network nears capacity, adding additional access points relieves that pressure and provides denser coverage. It’s a win-win for everyone!

In the 1700’s, two vital pathways crossed where uptown Charlotte now lies. One was the Great Wagon Road. Built by European settlers, it once stretched from Philadelphia to Georgia—and its existence set the stage for a mass southward migration of colonists. In North Carolina, the route bisected a large Native American trail. Remnants of these two roads still exist in Charlotte, where they’re known as Tryon and Trade streets. Today, their intersection is called Independence Square.