THE MACHINE NETWORK IN LAS VEGAS

The first nationwide network for machines is now available in Nevada.

As the Entertainment Capital of the World, the population of Las Vegas tends to ebb and flow throughout the year. All in all, there are over 62,000 rooms available on the Las Vegas Strip alone! All of that capacity and infrastructure put a huge demand on utilities & infrastructure, but luckily smart city technologies powered by RPMA provide the kind of insight and control business & government depend to keep must-have services available 24/7.

The Machine Network, powered by RPMA technology, enables machines and devices to communicate more efficiently and reliably than ever before. With the deployment of RPMA in Nevada’s largest metro area, municipalities, government agencies and businesses are able to tap into its always-available, ubiquitous coverage to build IoT solutions. 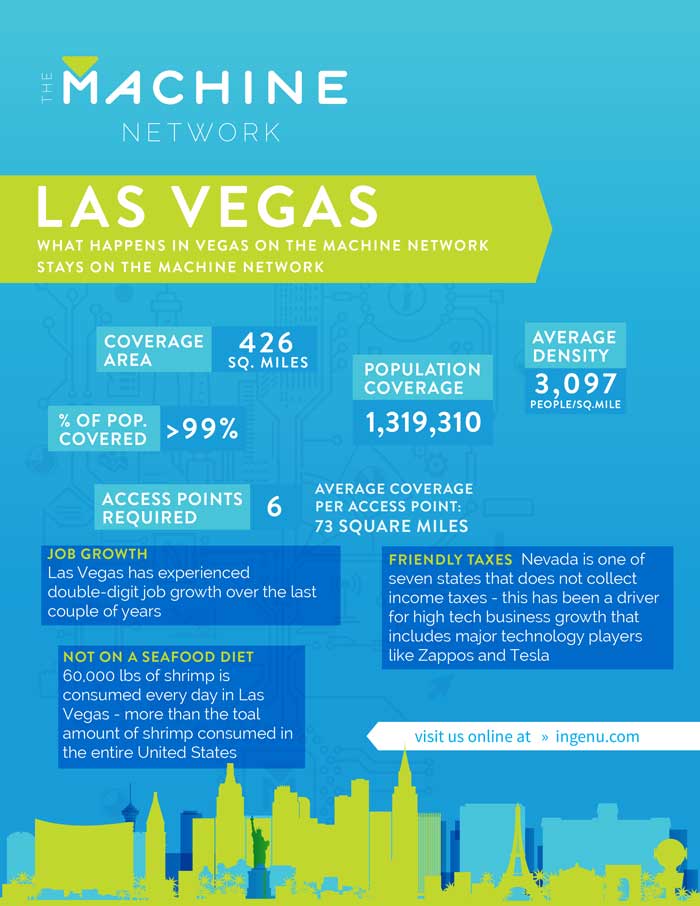 The rocky soil of Las Vegas has proved remarkably fertile for job growth over the past few decades. In fact, Las Vegas saw double-digit job growth over the last few years. A growing population of over 1.3 million entrepeneurs and everyday residents is now covered with advanced IoT wireless connectivity thanks to the Machine Network. Six high-tech RPMA Access Points completely blanket the valley with connected technology potential.

Nevada is one of seven states that does not collect income taxes – this has been a driver for high tech business growth that includes major technology players like Zappos and Tesla. Las Vegas has been a pioneer in smart city adoption as it was a participant in the U.S.  Department of Transportation’s Smart City Challenge, and recently announced it would be the first city in the U.S. to activate a vehicle-to-infrastructure (V2I) system on its public roads.