Let me start by admitting that cherry picking range is not directly relevant to building a commercial networks that must have deep reliable coverage. We cannot draw an 88 mile radius circle around one of our tower based Access Points and make the credible claim that by πr2,we can cover 24,000 square miles with a single tower. However, there is an indirect relevance in that the same aspect that allows RPMA to be used to build deep, reliable coverage (i.e. link budget) is the same aspect that allows for some truly amazing cherry picked results.  Other technologies advertise their cherry pick, so we will play that game and show you quite an amazing cherry in the process. 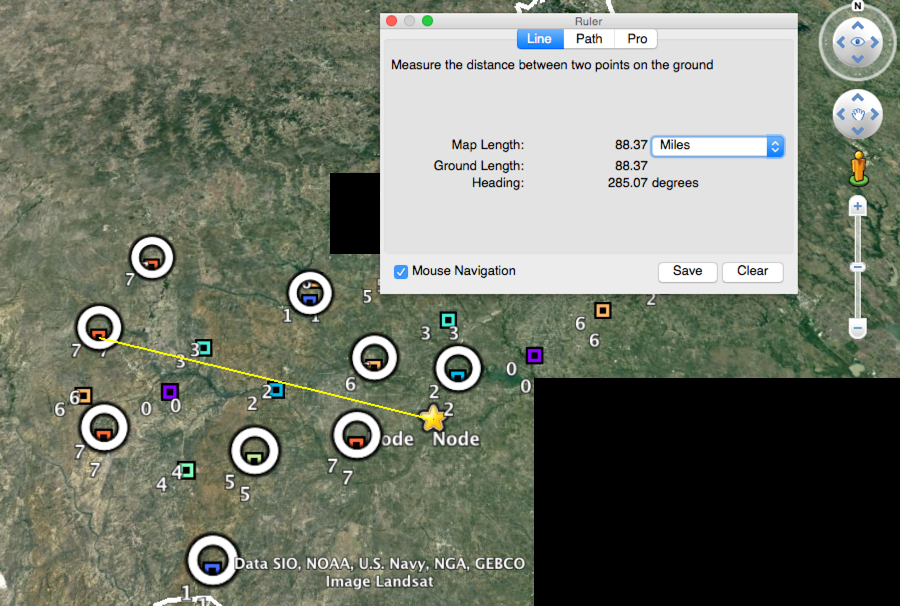 Ingenu has coverage in some very remote areas including Oil and Gas fields in rural Texas. The nearest Access Point shown on this map is 12 miles away from the endpoint (the star on the map) and this Access Point provides very reliable commercial service to that endpoint.   However, there was a period of time where that particular Access Point was offline and required a servicing of its backhaul.  As shown, there are two additional Access Points that are around 20 miles away which we would predict marginal coverage.  However, what we saw was that the endpoint was joining all the circled Access Point locations from time to time.  The endpoint always chooses the “best” access point at any particular instant in time, so presumably each of the radio links to those Access Points were deemed the “best” at certain time intervals. This is not that what we would call “reliable coverage”.  It is sporadic and certainly not coverage we would advertise.  However, the distances are extreme.

What was going on? Was this endpoint being driven around rural Texas?  Keep in mind the radio is about 1 inch by 1 inch and transmitting at a mere 100 mW.  Were we to believe that a radio link was closing at 88 miles?

First Reaction:  I Don’t Believe It

If you imagine running a commercial network, there are lots of moving parts.  Endpoints may not be deployed where your customer (or your customer’s customer) has claimed.  Or endpoints get moved around.  So I was fairly confident that the radio endpoint could not be where we thought.   Call it bad intelligence, call it the fog of war. Certainly this would not be the first time that has happened in our operational experience.

Now we have seen distances of this before when an Access Point on a mountain top which is visible from the endpoint location.  However, this is flat Texas so that clearly was not the case.  Doing the calculation to the horizon on our 250 ft tower:

So we’re more than 4x the horizon distance.  Even with the spectacular link budget of RPMA, that degree of over the horizon propagation is not possible.

Was Einstein Wrong About the Speed of Light?

We have built a lot of visibility into our network.  We know which Access Point each radio module is joined as well as the history of joined Access Point, Frame Error Rate (FER), Receive Signal Strength (RSSI), average spreading factor selection, power control accuracy, and lots of other data as well.  One other metric we have is Round Trip Timing (RTT).

Round trip time is measured when an endpoint joins an Access Point.  Why?  Part of it is because its cool and useful information as you will see.  But it’s also because the RPMA protocol makes use of this information.  The following explanation may make more sense if you read through my previous blog post.  The endpoint radio chooses a random chip delay as the channelization mechanism (hence the “R” in RPMA), but it needs to choose a chip delay that is in the window of what the Access Point is processing.  If the endpoint transmission comes in too late, it will not be one of the hypotheses that the Access Point is exploring.

At the typical distances of RPMA links, just the time to propagate these large distances could make the endpoint transmission come in too late.  So the Access Point measure this time-of-flight directly, and signals that information back to the endpoint radio so that distant endpoints can adjust the range of chip delays which is being randomly selecting.

We plumb all of this information to our Network Operating Center (NOC) as depicted in the screen shot below.  Note the number 947.

That is in units of what we call “chips” which in our caser is 1 microsecond.  So 947 microseconds is the measured RTT from when the endpoint module was joined to the most distant Access Point shown on the map.  So walking through the speed of light calculation:

Note the factor of 2 in the denominator.  Why is that there? The endpoint is recovering timing from Access Point so its sense of time is delayed by the one way propagation and it starts late, and then the signal takes more time to travel to the Access Point.   So it hits the endpoint in both directions. That’s why what the network is measuring is round trip delay.

I’m gong to assume that Einstein was correct about the constancy of the speed of light as well as his notions regarding causality.  In other words, there is no possible way that the endpoint could be closer than 88.8 miles from the Access Point without violating these notions.

Check out other mind-blowing performance by RPMA.

What Was Going On?

Tropospheric ducting is our best guess.

In this scenario a miniscule amount of power that actually makes it to the troposphere and is guided by the very slight refractive index gradient of the atmosphere.  That process leaks very miniscule amounts of power back down to earth.   With the extreme RPMA link budget, it turns out to be enough energy during certain weather events such as temperature inversion to barely close the link.  This phenomenon has been experienced radio broadcasts at 100s of  kWatts of transmit power, but I don’t believe this has ever been noticed at a mere 100 mW of transmit power.

Conclusions One May Draw

You often see cherry picking of ranges for wireless systems.  We are reluctant to play that game, but if you want to see an RPMA cherry, this is what that RPMA cherry looks like.  And  the same aspect that give birth to this cherry allows RPMA to build deep reliable coverage.

As this example suggests, visibility into the system is extremely important.  We have built an enormous amount of visibility into monitoring RPMA systems.  We’ve had commercial systems in service for 6 years and have been adding monitoring capability the entire time and we continue to improve this as our massive country-wide networks are deploying around the world.

Click here to download a white paper showing you Three Features No IoT App Should Be Without.